Holiday on a boat has some distinct advantages, not least that you’ll see Turkey at its most beautiful viewed from the sea. Today we’re letting you in on our most secret and secluded beaches, many of which can only be accessed by boat. Read on to discover the paradise beaches of Turkey’s Turquoise coast.

Cold Water Bay, also known as Besta Limani is north of Gemiler island, close to Fethiye. It is so names because cold water springs flow into the sea here, making the water quite brisk. Above towers a cliff that you can climb up on foot to reach a restaurant at the top or hike to Kayakoy, the abandoned ghost town we mentioned in our post 5 historic sites to see in Turkey by sea.

Staying near Fethiye and Gocek island you can visit Tomb bay. The beach is backed by shrubbery and the slopes of the Taurus Mountains as they rise steeply behind. Lycian rock tombs are cut into the cliff face, giving the bay its name. At Tomb bay you can imagine you are the last people on Earth, marooned in paradise.

Until recently much of the Datca Peninsula was only accessible by boat because the roads were so bad. Although these have now improved many of beaches are still so secluded they can only be reached by the sea. The peninsula is made up of mountains that rise and fall to create almost completely isolated coves between them. Nearby Orhaniye is a spit of sand submerged by the sea. Located in the bay between two opposing peninsulas, Datca and Boxburan, Orhaniye is nestled in. The town of Orhaniye is not technically inaccessible by land but visiting by boat offers a unique way to visit the watery beach.

This beach isn’t best suited to sun bathing but the shallow water is a delight to walk in. 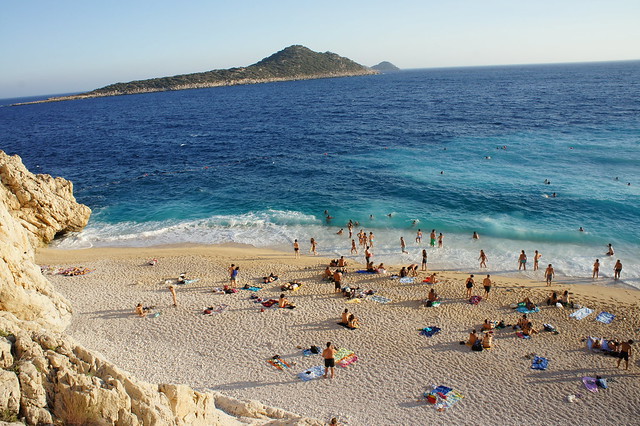 Kaputas is between Kas and Kalkan in the province of Antalya. It may be accessed from the road on foot but only if there is no water flowing through the canyon entrance at the time. This means Kaputas is far better accessed from the sea side rather than the land side.